After Bitcoin crashed to $ 42,000, the Fear and Greed Index fell to extreme fear values ​​not seen since July of last year.

As one analyst pointed out in a CryptoQuant article, the BTC Fear and Greed Index has fallen to very low values.

The “fear and greed index” is a crypto indicator that measures the general sentiment of investors in the market.

The index uses numbers to represent sentiment on a number scale ranging from zero to one hundred. Indicator values ​​above fifty mean that the feeling of the current holder is one of greed.

And values ​​below 50 imply that the market is fearful right now. Index values ​​below 25 and those above 75 fall into the “extreme” category, meaning extreme fear and extreme greed, respectively.

The indicator generally stays in the greed zone during bull racing. Extreme Greed Values ​​have historically signaled that a Bitcoin price correction could be near and a top could form.

On the other hand, fear values ​​may be present during downtrends, and extreme fear could imply that a bottom could form soon.

Related reading | Bitcoin whales contribute 90% of cash inflows to exchanges, how can we follow and make profit?

Now here is a chart that shows the trend of the Bitcoin Fear and Greed Index over the past year:

As you can see in the chart above, the indicator has now dropped to a value of 15. This is the metric’s lowest value since July of the previous year.

By the way, the day in July that such low values ​​occurred was also around when the price of Bitcoin hit its lowest point. However, the quant in the post notes that this doesn’t necessarily mean the current price has bottomed out as well.

After the May crash, the months of May and June were also marked on several occasions with similar extreme feelings of fear.

So it is rather possible that the current low values ​​of the indicator will persist for some time, as it was then, before the price rose again.

The chart below shows the BTC price trend over the past five days. 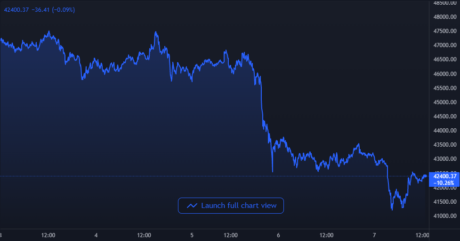