The biggest news in the cryptoverse for Oct. 27 includes  Vitalik Buterin affirming that crypto is better than gold, FTX planning to create its stablecoin, Bitcoin mining firm Core Scientific on the verge of insolvency, and a user paying just $0.08 in fees to settle a transaction of over $500 million on the Bitcoin network.

Buterin says crypto is a better bet than gold

Zach Weinersmith initiated an argument claiming that Gold was better than Bitcoin since the former fulfills crypto’s advocacy for money that is not centralized.

In response, Ethereum co-founder Vitalik Buterin said crypto is a better deal, given that gold is inconvenient to use in trading and has no safe storage mechanism for multiple users.

Bitcoin mining company Core Scientific said it may file for bankruptcy soon, as the rising electricity costs and falling Bitcoin prices have rendered its business unprofitable.

With just 24 BTC and roughly $26.6 million in cash, the mining company said it may not sustain its operation beyond the end of 2022, unless it succeeds in raising additional capital.

SBF hints FTX could potentially create its own stablecoin

FTX CEO Sam Bankman-Fried was live with the Big Whale, where he hinted at plans to launch a stablecoin for his crypto exchange.

SBF said FTX has been holding on from creating one because it is collaborating with some stablecoin issuers. However, an FTX-backed stablecoin could be launched in the not-too-distant future.

Token protection protocol Team Finance suffered a $14.7 million attack after a hacker exploited a vulnerability in its V2 to V3 migration feature.

Consequently, the protocol has suspended all trading activities till the bug is fixed. However, it assured users that the remaining funds are safe and will be available once it resumes operation.

About 24,530 BTC worth over $500 million was sent over the Bitcoin network and charged just $0.83 as a fee to execute the transaction within minutes.

In contrast, traditional payment networks like SWIFT will charge about $15 million, at a 3% exchange rate fee to execute a $500 million transaction.

Ethereum’s recent price action to $1,560 saw the second-largest crypto asset rise to become the 50th most valuable asset in the world.

With a market cap of $190 billion, Ethereum has surpassed Cisco and Alibaba, while gunning to top Toyota and Walt Disney, whose market cap sits at $195 billion.

Bitcoin maximalist Jim Messina said he is buying more Bitcoin despite the declining price. He added that he could bet his Porsche that Bitcoin will go back to $60,000.

A deep-dive into Bitcoin hash rate, reasons behind increase, and whether it will rise again

CryptoSlate analysis showed that Bitcoin mining difficulty and hash rate have been making new all-time highs since the start of the year despite declining Bitcoin price. 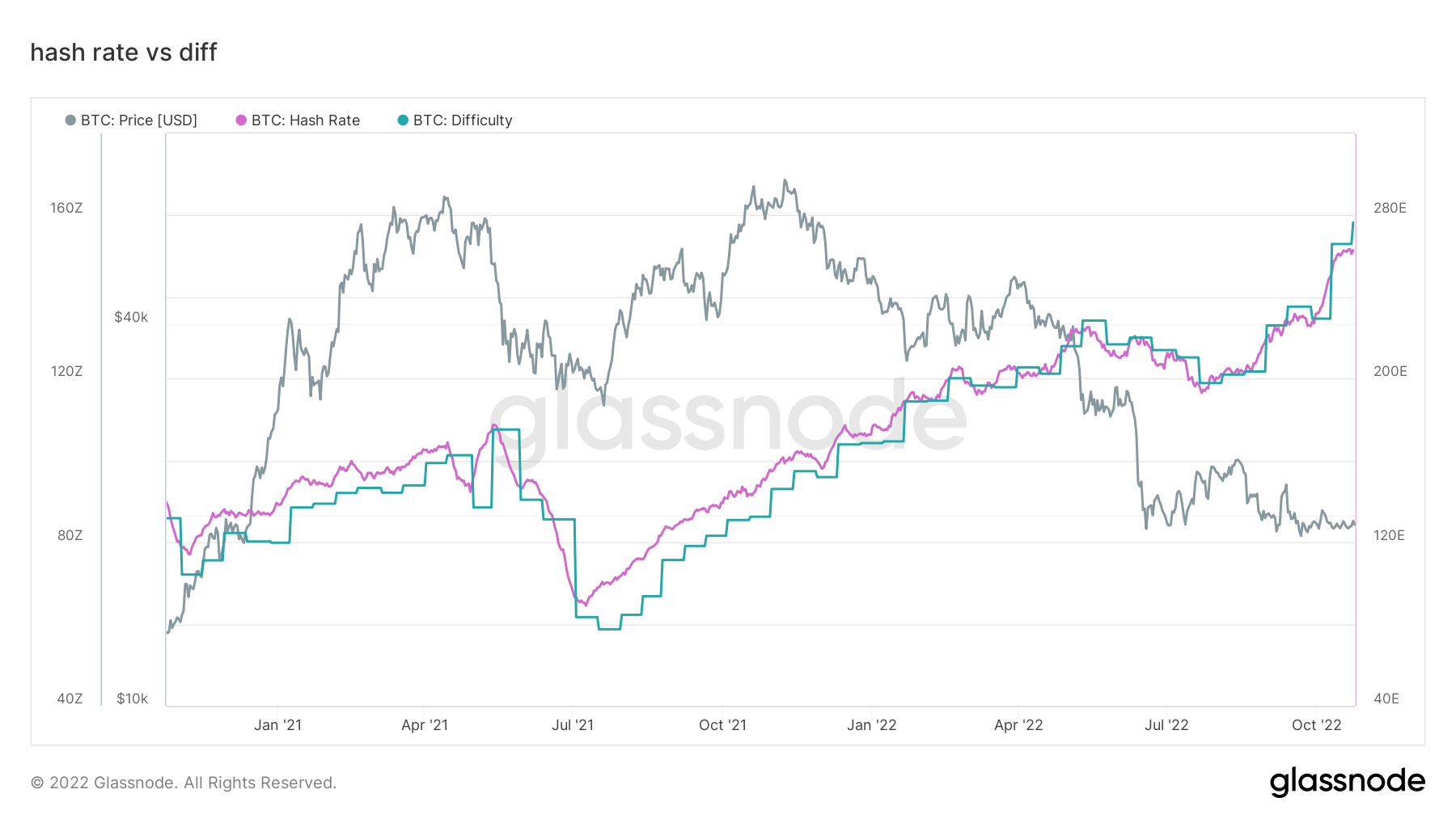 A possible explanation for the sustained surge could be linked to the Ethereum merge. Post-merge, ETH miners flocked into the Bitcoin ecosystem leading to the increased difficulty of processing transactions on the network.

LookRare said it will direct 25% of its protocol fee to pay NFT creators as royalties. For trading rewards, 95% will go to the seller, while the buyer receives a cash-back of 5%.

Huobi to delist its HUSD stablecoin

Crypto exchange Huobi announced that it will be delisting its native HUSD stablecoin. All pending HUSD on the crypto exchange will be converted to USDT before it is delisted on Oct. 28.