According to recent data from MEV Watch, for 24 hours timeframe, 64.44% of Ethereum blocks were compliant with OFAC standards.

However, the Ethereum educator and investor sassal.eth reported on Dec.9 that OFAC compliance topped 80% and then decreased to 65%.

Office of Foreign Assets Control or OFAC is responsible for enforcing economic sanctions enforced by the United States, while MEV-Boost relays act as trusted intermediaries between block producers and block builders.

Since the Merge, this metric tracks how many blocks have been built by OFAC-compliant MEV-Boost relays.

Through OFAC compliance the agency can enforce economic and trade sanctions following its foreign policy and national security goals. The agency, for instance, sanctioned Tornado Cash and several Ethereum addresses in the past.

Having sanctions on a network will likely result in long wait times and high-priority fees, ruining the user experience.

According to mevboost.org, there are ten active relays, and among them, 75.83% of all relay blocks have been built by Flashbots alone.

Flashbots is a research and development organization that seeks to reduce the potential harm associated with Maximum Extractable Value (MEV). 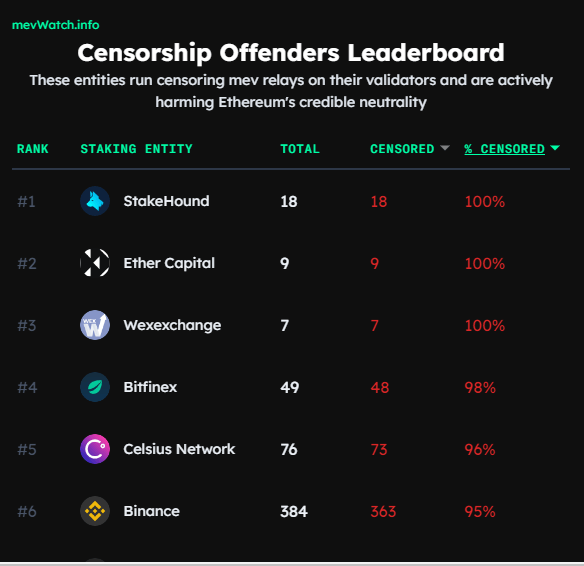 MEV Watch states that if users stake with top offenders on this list, they would directly contribute to Ethereum’s censorship.

Despite fears of total censorship, some Twitter users believe Ethereum will never be 100% OFAC compliant.

Personally have been underwhelmed by the OFAC block production outcry and am hopeful it will die down now.

My take: ETH will never be 100% OFAC and txs will always make it in over some number of blocks. Why never 100%? B/c censored txs pay more.