The Inter Blockchain Communications Protocol (IBC) has seen a rise in popularity recently, with over a million transfers recorded in the past 30 days.

With the introduction of the IBC on the Cosmos Hub, the range of possibilities for blockchain applications continues to expand, as the protocol supports the transfer of tokens between IBC-compatible chains.

cosmos network explorer, Areas Map, that IBC has handled more than 1 million transfers in the past 30 days alone.

The highest number of transfers, 460,274 to be exact, came from Osmosis, Cosmos’s automated market maker (AMM), which allows users to create liquidity and trade IBC-enabled tokens.

Cosmos, which acts as a service provider for the chains it connects to, saw the second highest number of transfers last month, 300,587 to be exact.

Crypto.com This followed as the global crypto payment network made 40,509 IBC transfers in the last 30 days. 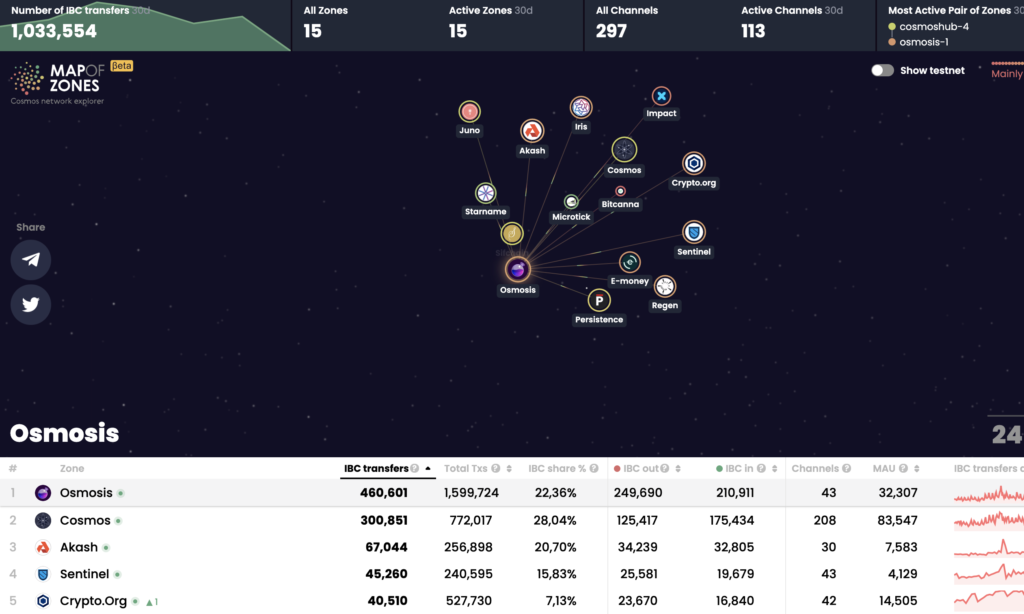 However, Cosmos recorded the highest number of transactions made through IBC, 1599,724 to be exact, while osmosis was followed by more than 772,017 and Crypto.com with 527,730 transactions.

Meanwhile, work is underway on a new Cosmos hub that is compatible with the Ethereum Virtual Machine (EVM) and is scheduled to be launched by the end of this year.

Evmos (formerly #Ethermint) EVM Hub of Cosmos, which will make it easier for smart contracts to deploy and communicate within Tweet embedIt is scheduled to be launched by the end of this year. 🚀

Continued Tweet embed For all future updates including details of their upcoming testnet. 👇 https://t.co/QF9HqzY9wn

Compatibility with EVM allows blockchain to increase liquidity on its networks by supporting Ethereum (ETH) assets.

“Evmos will be an application-less chain that will be interoperable with the Ethereum Mainnet, EVM-compliant environments, and other BFT chains via the IBC, making it easier for users and developers to seamlessly transfer value between chains,” read the announcement from the Developers.