What is the Bitcoin Stock-to-Flow Model?

The BTC Stock-to-Flow (S2F for short) method is a price prediction model popularized by PlanB. S2F is based on the ratio between inventory (current supply) and flow (annual production).

PlanB is often thought of as the creator of the S2F model itself, however, this is not the case. This method has been used in the past for other assets such as gold and silver, but PlanB was the first to apply it to Bitcoin. In this way, PlanB is the creator of the Bitcoin S2F scheme, although it is not the same basic concept.

The stock-to-flow value of an asset like BTC shows how scarce it is. The model associates this value with the price and gives a prediction based on it.

Here is the latest price chart based on the S2F model for BTC: 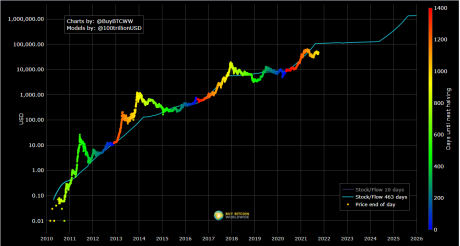 As can be seen in the chart above, the method was remarkably close to the real thing in its predictions. Although there are some points of deviation, the price always eventually fits the curve.

Related reading | Bitcoin jumps 10% in 24 hours, is the dead cat bounce or the real move forward?

At the beginning of the month, PlanB listed its Bitcoin goals in a file tweet. Earlier, the analyst had targets of over $47,000 for August and above $43,000 for September, both of which Twitter confirms were met.

According to the S2F model, Bitcoin should reach $100,000 by December and those targets appear to be in line with that.

Hitting $100,000 by December would be a hit or miss moment for the popular price prediction model as the month is only two months away now. At the moment, BTC price is hovering around $47.6K, up 10% in the past seven days.

Below is a graph showing the trend in BTC price over the past five days: 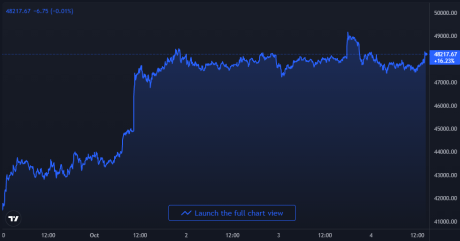 Bitcoin’s volatility appears to be back over the past few weeks as the price showed a lot of chaotic movement during the month of September.

But the value of the coin has flattened again now and it is not clear when there will be a movement in either direction. Although, if the S2F model is anything to do with it, the move up should happen soon.