The dataset from Foundry shows that four states in the US have the highest distribution of bitcoin hashrate. The dataset shows that many bitcoin miners are heading to New York, Kentucky, Georgia and Texas.

Foundry US is the largest mining pool in North America and the fifth largest globally. The hash rate is a measure of collective mining power. Pool mining enables miners to combine their hash power with other miners around the world.

Bitcoin mining in the United States 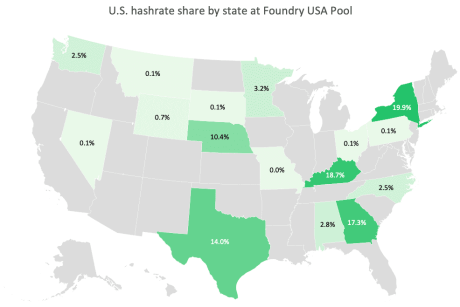 At the Texas Blockchain Summit in Austin on October 8, 2021, Nick Carter, co-founder of Castle Island Ventures, presented Foundry’s data. “This is the first time we actually have statewide insight into where the miners are unless you want to go after all the public filings and try to figure it out that way,”

“This is a much more effective way to find out where mining is taking place in America,” he added.

However, Carter noted that Foundry’s data set does not take into account all mining hash rates in the United States as not all mining farms located in the United States use their services. One of the largest publicly traded mining companies in America,
Riot Blockchain, which has a large presence in Texas, does not use Foundry. Therefore, the data set does not take into account its hash rate. The presence of mining in Texas is understated and may be higher than the mentioned 14%.

Many of the countries with the highest bitcoin hash rates also have high percentages of renewable energy. This fact may have started to change the narrative that Bitcoin is bad for the environment.

According to CNBC, a lot of miners are moving to these states because they have cheap, renewable energy sources. Data from the US Energy Information Administration (EIA) shows that a third of generation within the state in New York comes from renewables. Kentucky, which has the second-highest hash rate, is also known for its hydroelectric and wind power. The state government recently passed a law granting certain tax breaks for cryptocurrency mining operations.

Carter also said that the migration of miners to the United States is a positive because it means much lower carbon intensity.

Although Texas ranks fourth according to the data, experts believe it is the number one mining destination in the United States. The state houses mining giants such as Riot Blockchain, and Chinese mining service platform Bitdeer.

A report earlier this year shows that large orders for ASIC mining are also being delivered to Texas.

Crypto-friendly lawmakers, an unregulated power grid with real-time spot pricing, and access to substantial renewable energy, plus stranded or combusted natural gas, are what make Texas attractive to miners, according to CNBC.